In less than two weeks, we’ll all be back at schools, books stuffed into backpacks, assignments begrudgingly sketched into crisp new student planners, the carefree days of summer no more than distant memories.  Actually, though, for a runner, the summer (or any season really) can never truly be carefree, as every new days brings a new workout to manage, and those precious unscheduled hours often include rolling out or ice cupping.  The transition to the school year is thus sometimes easier to manage for us, especially as it brings the promise of the official cross country season, and thus the beginning of meets we’ve been working towards for months.

Like any transitional period, now is a good time to reflect on where we’ve come from and look ahead to where we hope to be.  Perhaps a good starting point for this season would be a team meeting we held shortly after the conclusion of track.  It was at that meeting that we distributed information about the 2015 summer running program and, for the fourth year in a row, offered team members the opportunity to sign up for the ‘1000 mile challenge.’  To join the club (and get the prized t-shirt) one must run 1000 miles between the first day of summer running and the day of the Conference meet, an average of almost exactly 8 miles per day, every day, from June through October.  To date, we have had 13 runners over three years accomplish this feat (Scully, McBrien, and Feldman have done it twice).

One way to quickly compare our team this year to past seasons is to consider July mileage.  I have compiled averages for most athletes dating back to 2012.  Here is the top 25, from 2012-2015

While we have only one athlete currently ranked in the top 10, I am not concerned.  Our mantra this year has been not only to work harder, but to work smarter.  As most any coach will attest, one of the hardest challenges is figuring out the right balance between pushing fitness levels as high as possible while at the same time keeping athletes healthy.  Reflecting on last season, we recognize the price we paid for success was high.  We are thus approaching the 2015 season differently, with a specific focus on injury prevention.  We have incorporated more exercises into our routine to strengthen our core muscles and kinetic chain.  We have encouraged cross-training as an alternative to higher mileage, especially for athletes with a history of injury (in fact, this year we are piloting the 1000 ‘mile’ club, where every ten minutes of cross-training is considered one mile of running).  We have encouraged athletes to ‘listen to your body’ and scale back if feeling fatigued or bone/muscle pain.

Unfortunately, risk of injury is inherent to running, and we have not been entirely free of its grasp this summer.  Of the 22 athletes who signed up for the 1000 mile challenge, three have suffered injuries serious enough to have to take more than one week off from running.  However, in two cases, we were able to identify the injuries before they became full blown, and we are hopeful all three will be healthy enough to resume training by September.

For the athletes who’ve been fortunate to remain in relatively good health, mileage numbers may appear slightly down as compared to previous seasons, but a closer look reveals that almost all team members are managing a higher workload this season than they were last.

To be on pace for joining this elite club in 2015, a runner should have logged 392 miles by this point.  As you will see, we have 5 athletes currently ahead of pace, with 5 more not far off.  Current mileage is below for the 22 athletes who signed up for the challenge.  For basis of comparison, I have also included their mileage up to this point in previous seasons, when that information was available. 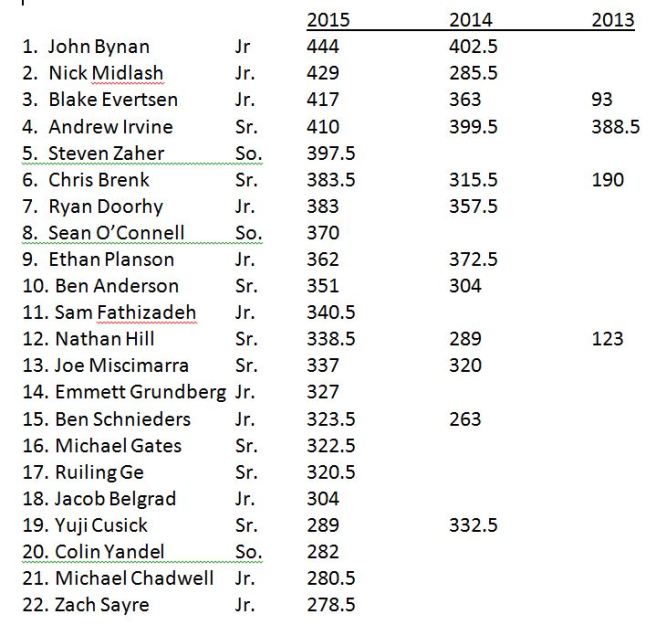 Reflecting on this data, a few things stand out.  First, I am proud of how many guys on our team not only have run this many miles, but that they have had the discipline to write down their mileage on our team training diary each day.  I am fond of the saying “Habits make the man” (or woman!) and firmly believe that the simple act of writing down your workout each day makes one a better runner, because it is another layer of accountability that helps keep you on track towards your goals.

Second, we have at least 21 guys (basically 22) who have averaged 40 miles/week or more over the summer months.  Ask any member of our team the following question: “What one single word is most cited by your coaches as the best way to improve” and you should get the same answer: “CONSISTENCY!”  Hard work over time will ultimately pay off.  These guys have shown consistency not just this summer, but over the course of their careers.

Most consistent of all has been John Bynan.  John last year established the record for highest summer mileage by a Sophomore, and this year establishes a team record for highest summer mileage by a Junior.  Most impressive of all, John came to every single one of our 25 organized practices, and to every single double!  (Not even the coaches did that-I missed Friday, July 10th so I could travel to Michigan for my cousin’s graduation party).  John Bynan will be a guy I tell future teams about, a model of what genuine sacrifice looks like.  Regardless of how his season turns out individually, his contribution to his team is already beyond what we could ever do to repay him.

Alumni might be surprised to see who is currently ranked 2nd in overall mileage.  Nick Midlash ran a grand total of zero miles during the entirety of the 2015 track season.  This had nothing whatsoever to do with laziness, but rather was a result of his doctor’s orders: a surgery he had over winter break meant he’d have to be confined to the exercise bikes for 6 long months.  So bike, he did.  Nick, to his eternal credit, still came to every single track practice last season.  When the fitness center was open, he went down to bike.  When it was closed, he went home to bike.  He worked himself into great aerobic shape, and so, despite not getting to compete in any meets, he used Track to make himself stronger and laid the foundation for the outstanding summer he has been having.  His current PRs, set during his freshman track campaign, are 5:28 for 1600 and 12:15 for 3200. To say he will be smashing those this year would be understating it.

In fact, if training goes to plan, all the athletes on the above list will be smashing their PRs.  All have certainly laid the foundation to do so.  This is a group that is as determined and dedicated as any I have yet coached.  By and large, they have all done the work, even when they were with their families on vacation and not able to come to summer running.  They will begin the official Cross Country season on August 12th fit and focused.  I don’t know what the end result of their season will be; I do know that this group has done as much or more as the previous two state championship teams to prepare for it.