In my nearly 25 years of competing and coaching, I’ve experienced my share of both triumph and despair, but three moments in particular stand out as being particularly agonizing.  All three involved falls.

In 1997, during the state cross country championships of my senior year of high school, my twin brother collapsed short of the finish line, his body succumbing to hypoglycemia.  He ultimately managed to crawl on his hand and knees the rest of the way, but ended third from last.  The final results showed us a single point behind Lockport Township for the state title, which would have been Mr. Newton’s twentieth.

In 2011, during the state cross country meet, a sort of déjà vu occurred, as our lead runner Jack Feldman’s legs gave out on him at almost the exact same spot on the course as they had for my brother 14 years earlier.  His dreams of all-state collapsed when his body did, and with it our hopes of a top-eight finish, which at that point had been a major goal for our team.

(The one time we qualified for Nike Nationals, our top runner Billy Magnesen took a fall 800 meters into the race and was unable to get back up, which caused us to finish dead last in the team standing.  However, the burn of that race was significantly mitigated due to the fact that we were still coming off the high of having won our programs first ever state championship a few weeks earlier).

The third moment came this past weekend, during the state finals of the 4*800.  We’d run a smartly executed race in prelims to set ourselves up well for the final, having run a measured 7:52.09, a season’s best for us up to that point.  We had a veteran group of athletes who’d been steady all-season.  Some guys you coach are up and down – you’re never sure they’ll be ready on race day.  I never worried about that with this group.  I was confident that they’d run smart and would not be rattled by the pressure of running in state finals.  The year before, we’d dropped 4 seconds off our time between prelims and finals, and I knew that we could do it again.  If so, we’d have a school record and definitely be in the hunt for a top 3 finish.  Anything better than 7th would be the top finish for our team since Coach Westphal and I started coaching back in 2005 (only the 1997 and 1998 teams have done better).

After careful deliberation, we had chosen Colin Yandel to run lead for us.  This was to be the culminating race of an astonishing senior year, one marked by stratospheric improvement.   In Cross Country, as we are now fond of saying, he went from “16th in JV Conference as a junior to 16th in state as a senior.”  He carried on this improvement in Track and Field, running PRs of 4:18 and 9:21 outdoors. Despite having a legitimate chance to earn all-state in the 3200, he’d selflessly decided to run the 4*800, choosing to help his teammates rather than seek individual glory.  Almost comically, he had finished his junior year of Track having run 2:20.6 in our JV conference track meet.  Guys like that don’t run in the 4*800 state finals.

Yet, 51 weeks later, he was clocking 1:58.0 at Sectionals, and his body, now Kenyan-like with long skinny legs and short waist, was ready to carry him even faster.  He’d been unflappable on meet day all season long, and we knew he’d position us well.

The gun was fired and the race began with the normal jockeying for position.    The pack was tight through the first lap, with all 12 athletes coming through the 400 within a second of each other.  Colin was right in the middle, and I worried about him being boxed in.

The pack came through lap one with all 12 teams together, in roughly 57 seconds.

About halfway down the backstretch, Colin finally found an opening and started motoring towards the front of the group.  Beginning the final turn, he’d moved up to fifth, and seemed about to close the gap on the front four when disaster struck:

Three freeze frames showing the moments right before, during, and after Colin’s fall.  It’s impossible to know exactly what happened, but the end result was the shattering of a season long goal held by Colin, Alec, Neil, and Sean.

When you get knocked down, the best of us get right back up.  Colin, acting on instinct, rose shakily to his feet, retrieved the baton which had rolled away after his face plant, and gamely hobbled towards the finish line.  By the time he passed off to Alec Hill, we were 75 meters behind everyone, an impossible gap to make up in a race like this.  Alec, Neil, and Sean did the best they could, but the air had been let out of the balloon.  The Track Gods would go on to claim two more victims in this race, with a Danville runner going down around the same spot as Colin did a lap later, and a Metea runner having to step off the Track on the final leg due to massive leg cramping.  We ended 10th place, one spot away from all-state. 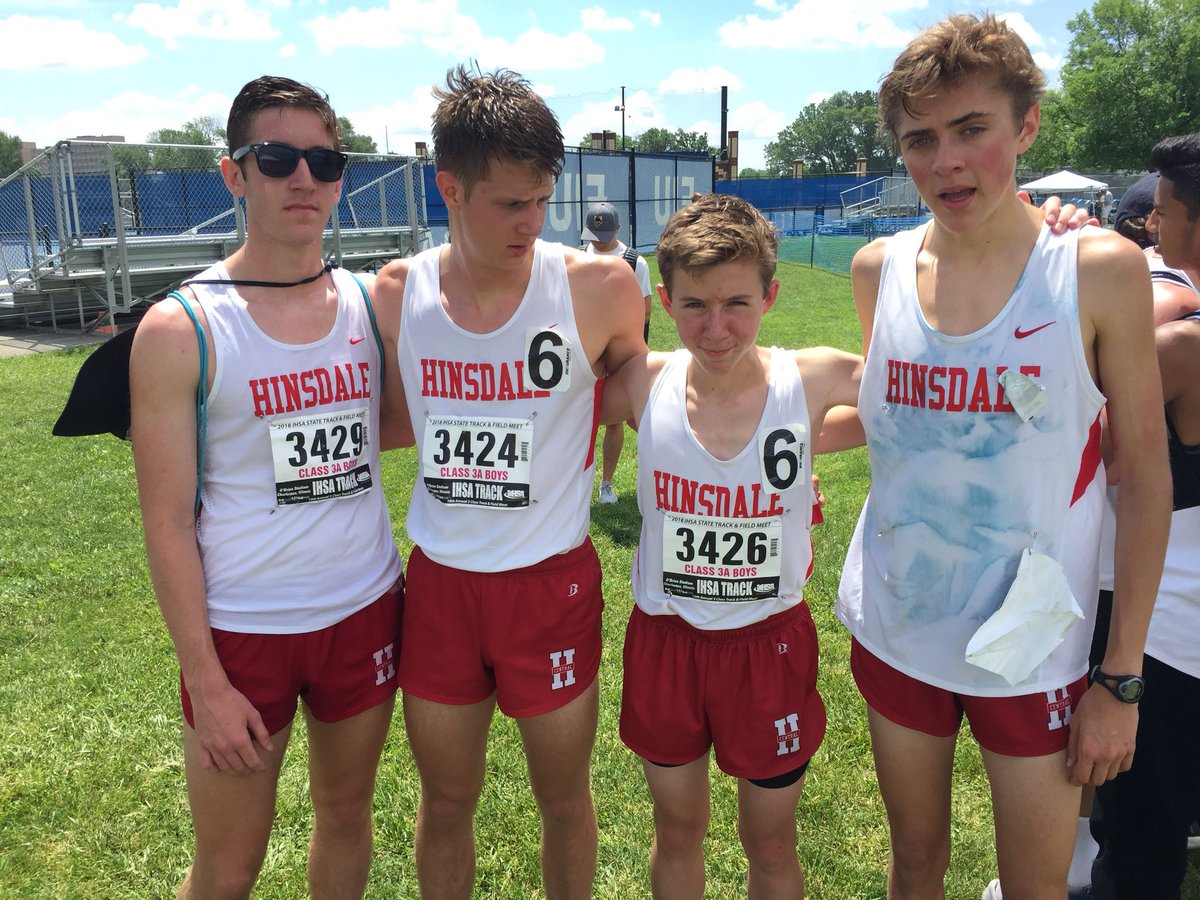 Here is the foursome after the race.  Notice the blue Track residue on Colin’s jersey.  He has been instructed not to wash his singlet, but rather to bring it with him to college and to pin it to the door of his dorm room, as both reminder and motivator.

What hurt the most was that this was a group who did everything right.  They worked hard, listened to their coaches, displayed no arrogance, and had fostered an inclusive and welcoming team atmosphere.  They’d all bought into the concept of team, choosing to scratch their individual events in order to give our relay the best possible chance of doing well (Neil Cumberland had qualified in the 800 with the 9th best seed time, and Yandel and O’Connell had both qualified in the 1600, with Colin seeded 9th and Sean 15th).  And they were rounding into shape at the right time.  Neil ran a 2-second PR at Conference to drop his 800 best to 1:57.5, then dropped again down to 1:56.2 at Sectionals, repeating that performance in Prelims.  Sean O’Connell had run 1:57.5 in both Conference and Sectionals before throwing down a 1:55.9 in Prelims.  And “little” Alec Hill had become a consistent sub-2 guy, running a PR of 1:59.5 in Sectionals and repeating the effort in prelims.  Added together, their PRs equated to a sub 7:50, so we knew that if we simply ran what we were capable of, we’d be in the mix.  As it turned out, a sub-7:50 would have been good enough for third.  I’d also note that by qualifying for state in the event, we joined Sandburg and Neuqua Valley as the only schools to earn a birth to state in the 4*8 for 8 years straight.  Not coincidentally, those two programs have finished top 2 in this event each of the past two years.

As a coach, when something like this happens, there is not much you can do.  You don’t get a redo.  Sometimes the Track Gods just don’t favor you.  You get dealt a bad hand.  I briefly saw Coach O’Malley outside the Track exits’ gate, and he tempered his joy to take a moment to offer comfort, remarking “all you can do is tell them you love them.”

True.  But, there is one other thing I can do.  I can tell the story of their race.  I can give context to the results, so when people read “Hinsdale Central – 10th – 8:08” they will understand what it means.  I can tell everyone that Sean ranks 4th in the “Westphal/Lawrence era” for the 800 and 3200 runs, and 7th in 1600 and is as focused a competitor as I’ve ever coached.  That Colin Yandel ranks 6th in the 1600 and 5th in the 3200 and underwent shocking improvement in his time with us.  That Neil Cumberland ranks as our 8th best miler and 6th best half miler, and after three years of struggling with being ready on race day put together a beautiful senior year where he came through in every single high pressure situation.  That Alec Hill is the most even-tempered and mature junior I’ve ever coached.

It seems crazy to me that Sean O’Connell and Neil Cumberland will graduate without any state medals.  They led the team to a surprise fourth place finish in XC, one place out of the medals, and finished 10th in the state 4*8, once again one place out of the medals.  However, I take solace in the fact that the two HC athletes ever to earn All-American status in college, Neil Pedersen and Nathan Hill, were never all-state in high school.

Nathan Hill, older brother of Alec, also raced on Saturday.  His race was the antidote to ours.  As a senior in high school, Nathan had a disappointing state Track meet, failing to advance beyond the prelims in both the 4*800 and open 800, despite a PR of 1:55.  Yet, two years later he was waiting for us when we arrived back in Hinsdale, having just finished third in the nation at Division 3 Nationals in the 800, with a time under 1:51.  Nathan, incidentally, has fallen in races more than any athlete I’ve ever coached.  But his story reminds us that, no matter the disappointments of high school, new promises await for those who choose to keep competing.

I, too, know from experience that nothing motivates quite like disappointment, that out of the embers of this stillborn 4*800 will be constituted successes yet unimaginable.  A stinging 1-point loss at the 1997 state meet led me towards a career of teaching and coaching, and filled me with a desire to motivate others the way my coach had motivated me.

The pain I felt after watching Jack Feldman’s fall in 2011 spurred me to go on a quest to meet with as many great coaches as would agree to see me (Chris Quick, Paul Vandersteen, Charlie Kern, Jason Crowe) to learn about the shared habits of top quality programs.  I credit both low points for setting me on the long path towards a state championship, which, when achieved, was all the sweeter owing to the knowledge of all that came before it.

So, to Colin, Neil, and Sean – and to the teams at Danville and Metea Valley and Downers Grove North (who would have been 4*800 favorites if not for an untimely injury to their top middle distance runner Brendan Lockerby) – be proud of what you accomplished, know that you were trailblazers, and use the pain of this moment to inspire you to achieve whatever goals you set next.

5 thoughts on “The Agony of Defeat”